“Marv Holman called. He said he was interviewing Tom Waits. We both worked for Down Beat magazine. Bring the camera, he said. “I’ll be at the Victoria Restaurant. I’m going to try to get him across the street to Cliff Raven’s (tattoo parlor).” Marvin thought taking photos of Waits getting a tattoo would be great for the story.”

“I didn’t know Tom Waits. Maybe I had heard the name.

It was a cold day in 1976. I’m not sure whether it was March or April. Waits was playing at the Quiet Knight almost next door to the Victoria and staying at the Wilmont hotel. A transient lodging less than a block away. “I like the Wilmont,” he said. “My manager likes staying downtown, but at the Wilmont I just walk in and throw my key on the desk.”

Marv and Tom Waits were there when I arrived, sitting at a booth by the window. “4 fried eggs, toast, jelly & coffee $1” read a paper sign taped to the window. The train screeched overhead.” 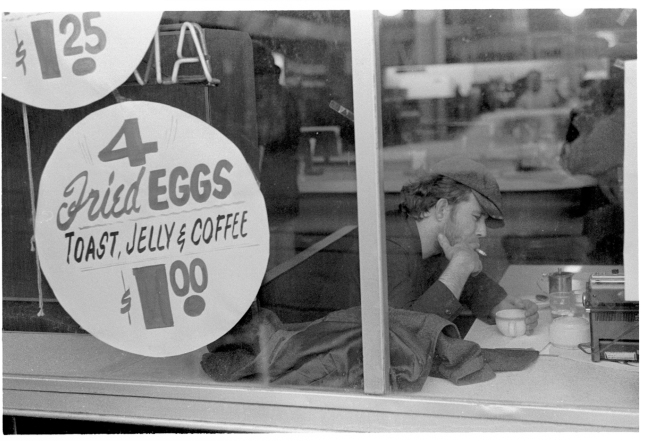 “Tom Waits’ long wool coat, looking third hand, was thrown in pile on a window ledge. He was drinking coffee and smoking cigarettes. His shirt sleeves were rolled up. He already had a tattoo. “Nighthawks”. His album “Nighthawks at the Diner” had been released less than six months earlier.

Marv was taping the interview with his boom box’s tape player. We weren’t too high tech in those days. I was introduced. I don’t recall a conversation.

The interview was getting started. I unpacked my Leica M4 and took some pictures.” 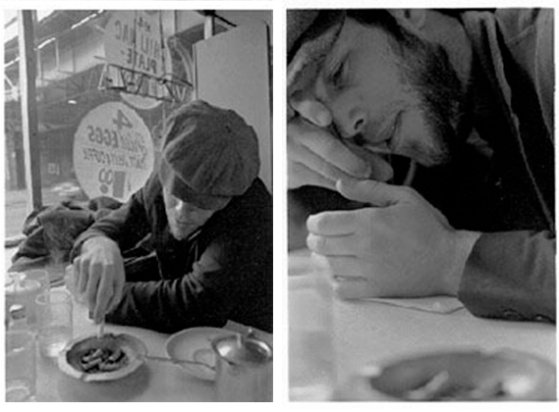 “After an hour or so Marvin and Tom were finished. We said goodbye and I went back to whatever it was I had been doing that afternoon.

“Bitin’ The Green Shiboda With Tom Waits” by Marv Holman appeared in the June 1976 issue of Down Beat. I think a piece I wrote about the Crusaders was in the same issue.

I eventually bought “Nighthawk at the Diner”. I couldn’t believe what I was hearing– jazz, hanging out grit and echoes of the Beat poetry scene–Corso, Kerouac, Ferlinghetti. Waits’ world hit home. Loved that double vinyl set. I still do.

I liked the pictures from the Victoria. Years later I began exploring my jazz and blues negatives (still at it) and making prints including the Tom Waits session. The first time I put one in a show along with Charles Mingus, Frank Zappa, Muddy Waters, Roland Kirk, it sold almost before the opening. That’s when I realized something was up with Tom Waits.”

“I still make custom gelatin silver prints from the original negatives on request. The prices depend on the size of the print.

Oh yeah, the Quiet Knight closed long ago. The Victoria was torn down and replaced by something-or-other. Everyone has a tattoo. The Wilmont is still on Belmont Ave., I think. Maybe I’ll check it out. Belmont Ave. is only a few “L” stops away.”