“In the late ’70s and early ’80s, I was a staff photographer for Andy Warhol’s “Interview” magazine. Besides developing Andy’s film from his nocturnal jaunts, I often shot portraits of the musicians for Glenn O’Brien’s “Beat” music column.

Glenn often reviewed up-and-coming artists. I got a call from the magazine asking me to shoot Tom Waits for his interview and the editor gave me Tom’s NY number and told me to arrange something with Tom.

At the time, all I knew about Tom was that he wrote off-kilter songs, smoked a lot and had a raspy voice. When I called him to arrange a shooting, he just told me that he wanted to shoot in Times Square. I had photographed several musicians and bands in Times Square and it seemed that location was popular with out of town artists.

One trick I had used previously in Times Square was to take a bag of chips or popcorn and spread the snacks all over a traffic island between Broadway and Seventh Avenue. There was a cast iron building facing west and pigeons would hang out on the facade of the building, basking in the warm sunlight. As soon as the food was sprinkled over the traffic island, the birds would swoop down from the building to eat. When someone in the band dropped some keys or made a loud noise, the startled pigeons would fly up and I could get a couple of shots with the group and the flying pigeons.

For Tom, another idea came to me. I thought I would get some shiny new steel chain with very large and thick links. I would wrap Tom with the chain, leaving one arm free to hold a cigarette.  The shot would be called “The Prisoner of Times Square”. I called Tom and explained my idea. His only comment was, “I don’t smoke.” I guess he had recently quit. Wife’s orders, I suppose…”

“I knew that there would be direct sunlight on the traffic island in this afternoon in February, so I asked Tom to meet me at 43rd and Broadway to shoot with uptown Times Square in the background. As it was February and the sun was setting early, I asked him to meet me there at 3pm.

It was so cold that day, that when I arrived at the location with my cameras and popcorn, the pigeons weren’t basking in the sun at their usual location, rather they were standing on a steel grate that allowed the warmer air from the subway below to rise up. Then I noticed that Marriott had built a new hotel since the last time I had visited Times Square and there was no direct sunlight on that old cast iron facade of that west-facing building.

I explained the plan with the pigeons and the popcorn to Tom and we sprinkled popcorn all over the sidewalk. I got my cameras ready and took a Polaroid to check the exposure. It was so cold that the Polaroid wouldn’t develop, so I had to use the in-camera meter, which I always tried to avoid.

At any rate, I shot two rolls of 35mm film. Tom was amazing with his poses. He just kept changing his position and his hands, I did full length shots and some closeups and all the shots from this session are amazing.

Tom tried to get the pigeons to fly and was even kicking his foot at them, but they just hopped out of the way and refused to fly up. 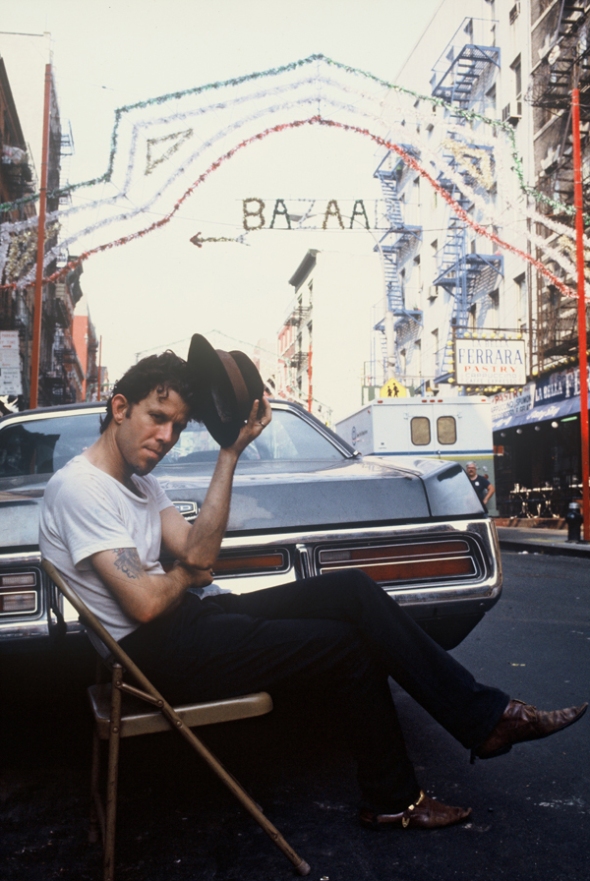 “The second time I had the honor of working with Tom was in the summer of 1985. I was the photo editor of SPIN magazine and we were doing a story on Tom.

This time, Tom wanted to shoot in Chinatown and not in any specific location. We just walked around Chinatown and Little Italy for a couple of hours, chatting and then stopping at spots that had interesting backgrounds or crowd scenes. It is during this shoot that I saw Tom was wearing the famous alligator shoes that were thrown out the window by his irate girlfriend in the movie “Down By Law”. Tom was obviously proud of those shoes and wanted me to feature them in several closeup shots.” 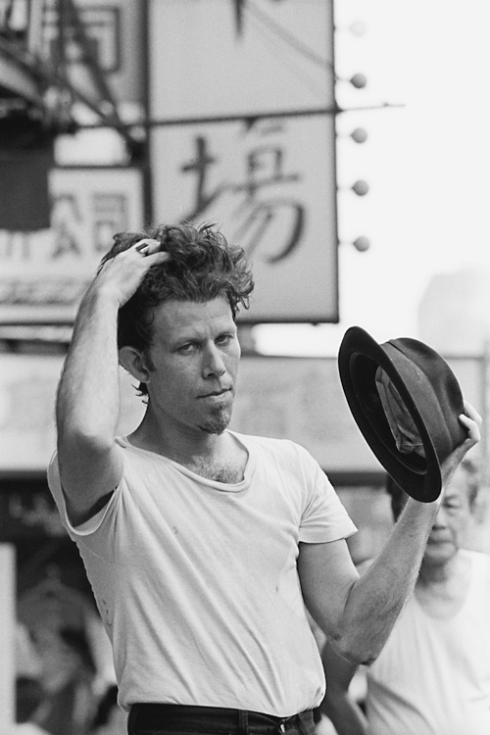 “Tom asked me if I was hungry and since I was also a starving artist, I replied in the positive. Tom told me that he had a friend who owned a Chinese restaurant and we could go there for lunch.

When we reached the restaurant, we were warmly greeted by the owner, given menus and led to a table in the back of the restaurant. Quickly making our choices, Tom asked me if I thought we should take some photos in the kitchen. I didn’t know that Tom had worked in a Chinese restaurant when he was younger, but he asked the owner if it would be OK and we went into the kitchen.

Tom certainly seemed at home at the stove and posed with a wok for about 45 seconds. He didn’t seem to want to make a “big deal” out of the kitchen photos, but they are some of my biggest selling images of Tom.”

“My photos from these two sessions with Tom are amongst my biggest selling images in my archive. I have to confess that I am a little jealous of my colleague, Anton “Ze Famous” Corbijn, having photographed Tom on so many more occasions than I did. It is only that Tom didn’t play any “roles” in the photos that we made together. It was just Tom being Tom.”

These and other photos are available as fine art prints. Please visit George-DuBose.com for details.

One response to “George DuBose”