The Mystery of Tom Waits 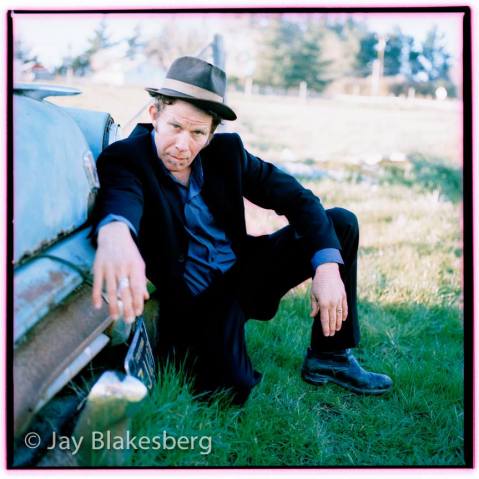 “February 4, 1999 was the scheduled day for my portrait session with Tom Waits. The location was to be Prairie Sun Recording Studio in Cotati, California. Cotati is 60 miles north of San Francisco and fairly rustic and Prairie Sun was just that…rustic. A beautiful state-of-the-art recording studio set on a 20-acre chicken ranch. There were beautiful hi-tech rooms built inside older re-furbished barn type buildings. There were also hundreds of chickens, old red barns with peeling paint, an abandoned claw foot bathtub and a motorcycle littering the grounds around the small buildings that housed the visiting artists who were recording there. Visually, you couldn’t ask for a better location to shoot someone like Tom.

On this crisp and clear winter day, I set up my Tripod with a 4×5 view camera behind a small tin-walled building that also sported an old fashioned water heater made out of steel. For the possible cover photo, I set up some studio lighting in front of an old set of wrought iron furniture with the beautiful blue sky and green hills as the background. I scoped out several other locations as possible backgrounds for available light shots where we could move around freely without the constraints of set lighting. I had lots of ambition, and a 30-minute window to get the cover shot and photos to be used inside the story.” 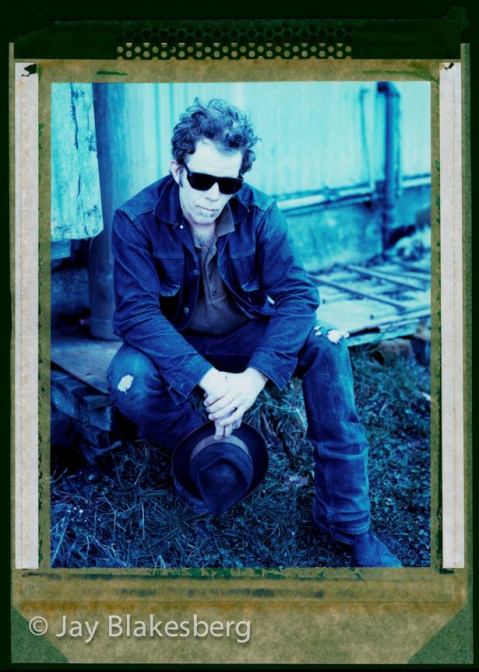 “When Tom arrived, I sat him down on the wrought iron furniture and shot a test Polaroid. He looked at it, and in his I just drank a bottle of whisky and swallowed a box of razor blades voice, said, “Jay, this looks like my grandmothers furniture, what else you got?” We shot no film. Next we went to the claw foot bathtub. “No, don’t like it,” he said in that raspy voice. We shot no film. “How about this wall on the side of the barn with the peeling paint I asked?” “Nah.” At this point about 10 minutes of my 30 had passed, and I had not taken a single picture. The publicist who was just as perplexed as I was didn’t know what to do. I lead Tom to the old motorcycle and he proceeded to circle it like a hungry vulture. Feeling a little bit nervous about the lack of photos taken, I started snapping pictures of him eyeing the bike. He sat next to it on the ground in the harsh sunlight, looked up at me with squinty eyes and I blasted off a whole roll of 35mm film. He got up and said, “he wasn’t feeling it.” Usually when I shoot an artist in one spot, even if it is just for five minutes, I might try a few different types of film, cameras and/or lenses. Things were not going so great. We walked over to where I had my 4×5 set up and I asked him to sit. He said, “I prefer to stand.” I offered to do a Polaroid of him both sitting and standing so he could compare. “You know what Jay, your right, it’s better with me sitting.” I shot about six sheets of 4×5 film, and about eight frames of 35mm when he got up and insisted that we leave the farm and drive to this house just two or three minutes down the road where he’d seen an old abandoned car earlier that day. Our 30 minutes were pretty much up, so I said “Yeah, lets go.” Tom wanted to change out of his jeans and in to his black Italian suit that was tailored to fit a man about two sizes smaller than he was. I huddled with my assistant to gather cameras and film as quickly as we could. We left all our lighting and 4×5 camera set up in their original locations and I jumped in to Tom’s truck with three cameras around my neck while my assistant and Tom’s publicist followed behind. As we drove down the backcountry roads Tom and I talked about people we knew in common, mostly musicians, kids and the weird relationship artists have with press. I shot a few photos while driving when he asked if I remembered the old woodpecker stickers from the sixties with the big wide mouth grin. Before I could answer he began to make the face for the camera and me.” 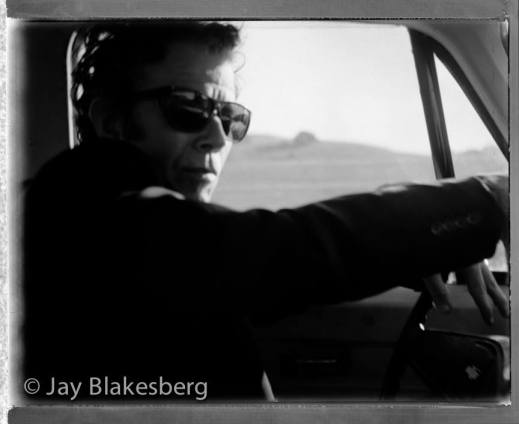 “After about 20 minutes of driving to the house that was two or three minutes away, Tom informed me that we were possibly going to run out of gas. I thought, “How great, pictures of Tom Waits pumping gas! Very cool!” He said “there are no gas stations on this road”, much to my dismay. After 30 minutes and almost half way back to San Francisco, he announced we had arrived.”

“About 200 feet up a long driveway, behind a small house with all the windows covered by old sheets, and over a short barbed wire cow fence, sat the car he had scoped out. “Jay, I don’t know who’s house this is, or who that car belongs to, but you are the captain of this ship so you better go knock on that door and ask permission to take some pictures.” With my cameras around my neck, I quickly went to the door and started ringing a doorbell that did not seem to be working, first knocking politely and than with a louder, fist-pounding action. No one answered. I went back to the truck and informed Tom that no one was home and we should just “do it.” He agreed, and the four of us started to work our way up the long driveway towards the car. Halfway there, a little old lady came out of the back of the house. She was wearing what would now be considered a vintage overcoat, but for her, the same coat she wore when it first was in style 40 or 50 years ago and a chiffon scarf tied around her head and under her chin. She yelled at us in a piercing scream, “Can I help you?” I responded that we were wondering if it would be all right if we hopped the fence and took some pictures of my friend Tom in front of the car. She responded in an even louder voice, “THAT CAR, IT DOESN’T DRIVE.” “No,” I answered. “We don’t want to drive it, just take some pictures,” as I held up two of the cameras that were weighing me down like the Dennis Hopper character in Apocalypse Now. Again she screamed ” IT’S GOT NO WHEELS!” I shook my head, motioned to my cameras and Tom and realizing the woman was as deaf as a stone, I loudly replied, “We just want to take some photos.” Her response was “IT HAS NOT BEEN DRIVEN SINCE MY HUSBAND DIED 30 YEARS AGO.” I grabbed a piece of paper and sharpie from my assistant, and wrote – “We just want to take some pictures; I can pay you $25!! ” Waving my offer of money away with her hand, She responded in an even louder voice, “OK, BUT IT’S GOT NO WHEELS!” She walked back to the house and we proceeded towards the barbed wire fence and the setting sun. The car was beautiful! When Tom got in front of the car, he went into character as the “sleazy car salesman” waving his hand out like an automobile spokesperson and added the wide grin woodpecker face in for fun. He prowled around the car, stopping to inspect the trunk, the sides and eventually the front grill where he insisted that his face and the grill of the car looked alike!”

“I was shooting as fast as I could knowing that our 30 minute shoot was now well over 90 minutes and could end at any moment. After the grill shots, Tom jumped up and I broke out a fun little plastic toy camera called an “action sampler” and shot what would be my last roll of film. I was hoping we could have done a few more angles – you know, “just one more shot,” but he jumped over the fence and I quickly followed carrying just an old fashioned Polaroid Land Camera that does not really focus. He trotted down the driveway with me in hot pursuit shooting Polaroids and dropping them on the driveway as we went. He got to his truck, shook my hand and kept driving south most likely in search of the nearest gas station. 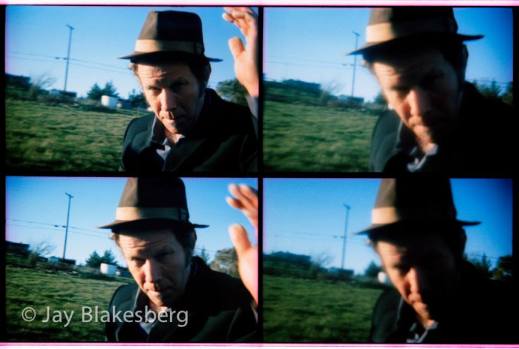 The three of us who remained were feeling a bit dazed and overwhelmed by what just happened over the last 90 minutes, and gathered our things and headed back north to the studio to retrieve my photo equipment and make the drive back to San Francisco.

All we could wonder was if this was some completely once in a lifetime experience, or was this what Tom’s everyday life was really like? The mystery of Tom Waits….”

More images from the shoot can be viewed on Jay Blakesberg’s Facebook page.

One response to “Jay Blakesberg” 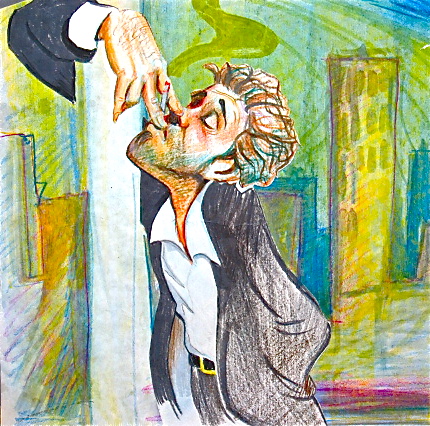