With the filming complete and the live action now edited, we were ready to do the rotoscoping. The rotoscope was a device that included a lightbox for tracing, and required a dark room for the best image clarity. With no darkroom handy at the studio, we put the entire contraption in a standard clothes closet, leaving just enough room for the artist.

Keith Newton, the youngest member of the cast, had a beautiful line and his character study of Waits was masterful – and it was chosen for the film. His reward for this honor among the artists? He was elected to singlehandedly trace the entire 5 ½ minute live action film (around 4,000 drawings) by hand. 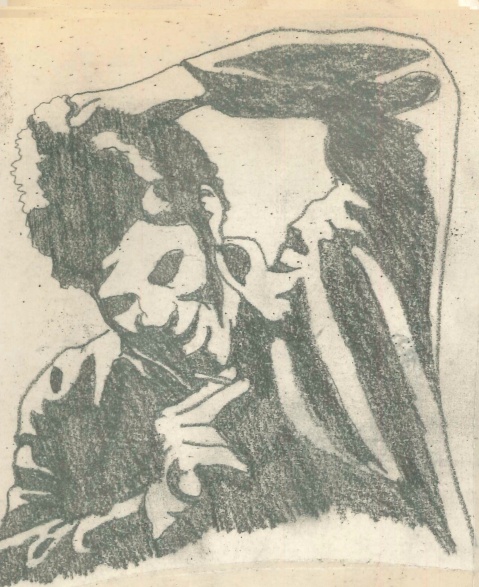 So there was Keith Newton, with Waits, the apparition and the rotoscope in that dark closet for 6-8 hours each day for three months. The apparition, played by the actress Donna Gordon, became a studio favorite. Apart from Waits himself, gorgeous Donna Gordon drawings filled the studio walls, and most of those drawings can still be seen throughout the Tom Waits For No One Scrapbook.

As weeks turned to months in the rotoscope closet, the tedious process was taking its toll on Keith, which became apparent in his random drawings: little cartoon demons looking over his shoulder while at the drawing table, and a nightmarish horned-Waits hovering over a bed, while a set of eyes (presumably Newton’s) peek out from under the covers. In retrospect, it had to have been hellish for Keith, and his drawings tell the story more clearly than he ever said!

When Newton completed a scene, it was off to the animators, David Silverman, Rod Dryden and Harry Sabin, to apply the character to every drawing. After the drawings were cleaned up, Mike Cressey would ink each one onto a cel, ready to be painted. Cressey had a beautiful line as well and hands like a surgeon. He inked the entire film himself.

The animation team experimented with several color combinations for painting both characters. When the colors were finally chosen, the cels were all painted by hand. Ray Roberts’ amazing airbrushed backgrounds completed the overall atmosphere of the film.

Once the film was finished, a squall of activity followed – the premier at a Hollywood film festival, early acclaim, interviews and articles about the film, the break-up of Lyon Lamb, and then – as fast as it had arrived, the film disappeared.

Tom Waits For No One is now being archived for preservation by the iotaCenter in Los Angeles, a non-profit which brings attention to and preserves underrepresented, experimental works in film and animation. The Scrapbook, is perhaps the most complete record of the talented team, their work, and the film itself. Completed in 1980 as a personal record, I simply put it away and moved on.

Just a few months ago, I discovered an article on the last page, pasted on the inside of the back cover. The Mix, a music magazine still in publication, featured an interview with Tom Waits (volume 4, issue 6) in an article titled “The Making of a Blue Movie”. An excerpt is included, the interviewer asks questions and Waits replies…

What do you think of the cartoon?
I think it’s remarkable. It has a lot of feeling to it…it moves very well.

Several years after the film was completed, while waiting at a stop light in North Hollywood, a 1964 gold Coupe de Ville with white upholstery pulled up – it was one of Detroit’s finest. With the windows rolled down, a guy had his arm hanging out the driver’s side with his t-shirt sleeve rolled up. I then realized who it was. “Hey Waits,” I yelled.

Tom looked over at me, and said “Hey, you’re that Lyon Lamb guy…” and tipped his porkpie as the light turned green. I went east on Gower as Tom continued cruising that gold Caddy south in the Hollywood sun. 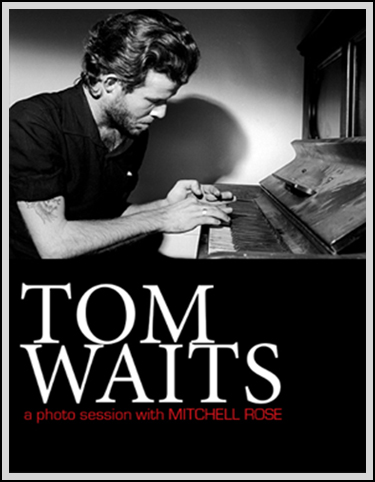